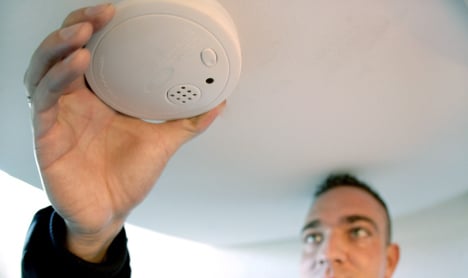 Most Berlin politicians have now agreed that smoke alarms are a good thing – cheap, easy to install, and life-saving.

But the idea of making them mandatory was rejected last year by the city’s previous, and more left-wing, government. That was replaced by a coalition of the centre-left Social Democratic Party and the conservative Christian Democratic Union in September 2011.

The conservative Henkel resurrected the idea this week, Berlin’s Tagesspiegel newspaper reported on Thursday, and gained the approval of the deposed Left party. Though the socialists warned that the devil was in the details.

“Obviously it makes sense to protect tenants from fires.” But he pointed out that no-one had yet satisfactorily explained who would pay for the installation and maintenance of 1.6 million smoke alarms – tenants, landlords, or both.

It also remains unclear whether the new measure would be part of building regulations, a new law, or part of the tenants’ rights.

There is already a smoke alarm obligation in ten of Germany’s 16 states.

The association of Berlin-Brandenburg housing companies believes that smoke alarms are not effective. “Smoke alarms don’t prevent fires, but they can give people a false sense of security,” argued spokesman David Eberhart this week.

On average 30 people die in fires in the capital each year – many of them at night, with sleeping victims killed by smoke rather flames.