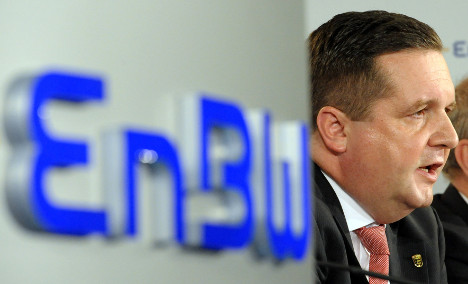 Stefan Mappus, the conservative state premier of Baden-Württemberg until last year, spent €4.7 billion of taxpayer’s money on buying 45 percent of the regional utilities group EnBW in December 2010 – three months before the state election he lost.

He worked closely on the sale with an old friend, the head of investment bank Morgan Stanley’s German operations, Dirk Notheis, who is now under investigation accused of accessory to breach of trust.

Prosecutors raided ten flats and offices across the country on Wednesday morning in connection with the investigation, confiscating written documents and hard drives.

They swooped after deciding a report by the state audit office provided solid indication that Mappus and Notheis had committed crimes – by ignoring the correct procedures to ensure the share price was in the interest of the state.

There were no “justifiable reason,” for the contract being signed for €41.50 per share rather than the €39.90 minimum being demanded by the seller, French energy firm EdF. The decision to use Morgan Stanley as an advisory bank could also have damaged the interests of the state, the prosecutors said.

It has already been decided by a state court that the rapid purchase – bypassing the state parliament – had contravened the state constitution.

A parliamentary committee is investigating the deal. State Finance Minister Nils Schmid was expected to submit a report on Wednesday proving that the state paid €840 million too much for the shares.

Mappus lost the March 2011 election in a blow to Chancellor Angela Merkel’s Christian Democratic Union, leading to Germany’s first Green-led state government. His handling of the protests against a controversial multi-billion-euro rail project in Stuttgart was widely held to have contributed to his fall from power.