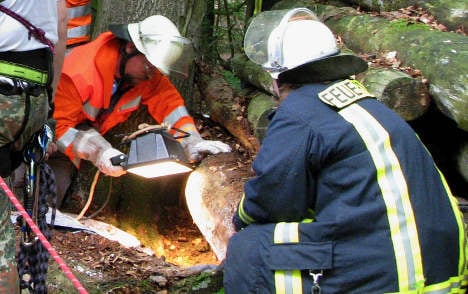 The 37-year-old woman, who has only been identified as Ina K., risked her own life when she jumped down the mineshaft after Jannic fell down it. She had no way of knowing what was awaiting her when she jumped – and landed in water 25 metres below the surface.

Roots growing across the shaft and in the water at the bottom broke their fall, but the pair still spent over an hour in water of around five degrees Celsius, with Ina K. supporting herself on a ledge while holding the child, Bild newspaper reported. A doctor later said that the woman’s body temperature probably saved the boy’s life.

The incident happened during a kindergarten trip out into the Osterwald forest in the state of Lower Saxony on Monday.

The rescuers managed to haul up Jannic first, and then Ina K. 20 minutes later. “The boy was shivering, but not crying,” volunteer fireman Roland Meyer said. He suffered a bruised liver, while his teacher escaped with a few scrapes, though her face was bleeding as she was brought up.

Police said there was currently no criminal investigation, as it remained unclear who could be held responsible for the disused shaft. Joachim Menzel, director of the local forestry commission office, told Die Welt, “There is a whole series of these shafts, which are unknown and hidden under leaves or the forest floor.”

He said most of them had been filled in with earth, but some were still open, and added that the hole Jannic had fallen into had been covered with thick tree trunks.

“We check the area regularly,” said Menzel. “The last time was two or three months ago.” He said that the shaft had opened further since then, creating the gap the boy fell into. “Even if we’d sealed the shaft with concrete then, the hole would’ve got bigger in that time.”

Rochus Rieche, division head for mineshaft safety at the Mining, Energy and Geology Department of the state of Lower Saxony, said there were 55 known shafts in the Osterwald area, but his office had no information on their condition.

He told Die Welt that they had presumably been filled in about 80 years ago by the then owner of the mines, but that their current safety was the responsibility of the forestry commission office, which now owns the land.

“We will work together with the forestry offices to work out how we will better secure the shafts in the future,” Rieche said.