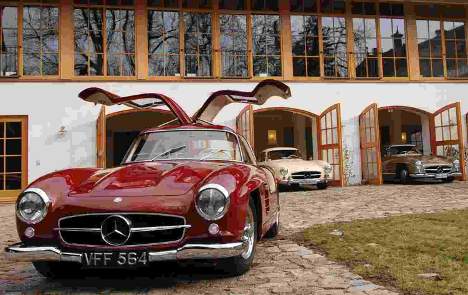 We'll have some of that, thank you. Photo: DPA

The German Institute for Economic Research (DIW) suggested that those with a substantial private fortune be forced to hand over 10 percent of what they have over €250,000.

This would hit the richest eight percent of the population and would not lead to the feared reduction of consumer demand, it said.

The tactic could be adopted to raise money in crisis-hit countries across Europe, the DIW said in a statement.

Bach said private fortunes in the eurozone countries are greater than the state debts in Greece, Spain and Italy.

The DIW said fighting the current crisis with state money can only go so far, as most is tied up in infrastructure, the sale or privatisation of which only yields short term liquidity.

The private sector must become involved. “There are many historical examples of mandatory bonds and one-off capital levies,” Bach pointed out.

He said high personal allowances would be set to prevent people being impoverished – and the fortunes of companies would be protected to ensure smaller firms were not left unable to pay bills.

The DIW has calculated that all personal fortunes above €250,000 per person in Germany equals around 92 percent of the country’s gross domestic product.

“If the people deliver ten percent of this excess value, it could produce nine percent of the gross domestic product – around €230 billion,” he said. “With that one could bring the German debt down significantly closer to the Maastricht limit of 60 percent.”

He said it was difficult to provide a clear estimate of what private fortunes would be worth for crisis countries because figures were not as reliable, but statistics showed they were clearly more than what the governments owe.

The advantage of a capital levy would be that those affected would find it more difficult to avoid than ordinary taxes. Combining it with mandatory bonds would also create the possibility of repaying some of the money, which would reduce opposition to the idea.

“Particularly in European crisis countries, a levy and mandatory bonds would be a sensible option and a signal for lender countries and funds that one was trying everything at home to secure their state financing,” the DIW said. “And at the end of the day it would also work against the inequality that has clearly increased.”