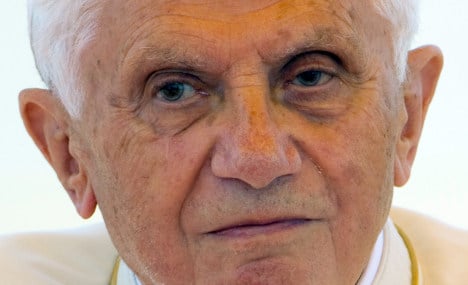 Hamburg district court said on Tuesday afternoon it would issue an injunction preventing further publication of the Titanic magazine, although copies already on the market can still be sold.

The front cover bears a photograph of the pope with a large yellow stain on the front of his cassock and the headline, “Hallelujah in the Vatican – the leak has been found!”

The back cover has a photo of him from behind with a large brown stain and the headline, “Another leak is found!”

Matthias Kopp, spokesman for the German Bishops’ Conference said was an infringement of Benedict’s personal rights and was illegal. The magazine had overstepped “any acceptable mark” with the pictures, he said.

But Titanic editor Leo Fischer said he was pursuing personal contact with the pontiff and was prepared to fight the case all the way through the courts.

The German Press Council said on Tuesday afternoon that it had received one complaint from a reader about the picture.

The last time the Vatican took legal action against the Titanic was in 2010 when it complained against a cover which showed a Catholic priest kneeling in front of a crucified Jesus – who was blushing.

That cover, which referred to the sex abuse scandals in the church, provoked around 200 complaints to the Press Council, which nonetheless decided not to take action.

An initial statement from the magazine quoted Fischer saying, “Benedict must have misunderstood us.”

He suggested that the cover showed the pope, “who was celebrating after the leak affair was solved and in his excitement has spilled a glass of lemonade over his cassock.”

The leaked documents shed light on many Vatican secrets, including the Church’s tax problems, paedophile priest scandals and negotiations with hardline traditionalist rebels.