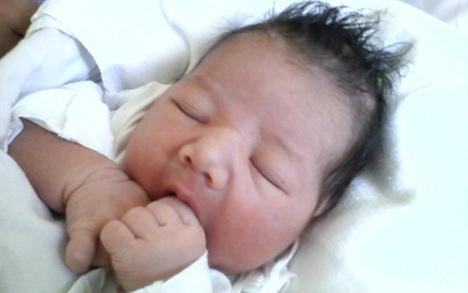 The baby girl’s mother was pushing her along the street in a pram when a man literally snatched her up and ran to a waiting car which sped off.

An immediate search for little Michala Janova was launched in the town of Usti nad Labem (Aussig) that day – July 4 – but to no avail, Die Welt newspaper reported.

The suspects had allegedly been heard talking in German-accented Czech before snatching the baby and bundling her into a car.

Police traced the black car, which had been spotted on the motorway heading towards Germany.

The registration led them to a German car rental company which narrowed down the search area.

A photo of the child was distributed in the area earlier in the week – and two doctors came forward to say they had treated her.

She was found in Neuewied, near Koblenz on Tuesday.

“We are convinced that it is her,” said Vladimir Danyluk, head of Usti police. He would not give any more details at a press conference on Tuesday, saying the investigation was continuing. He did confirm that the four people arrested were German.

Her grandfather was quoted on Czech television saying, “We only know that she has been found and is healthy. And we are delighted by that.”