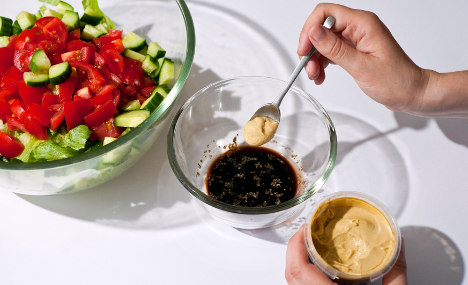 The 34-year-old driver lost control of his condiment-crammed truck when one of the tyres burst. It skidded 20 metres into a tunnel in North Rhine-Westphalia before hitting the wall with such force that the contents sprayed all over the road.

The mustard and vinegar ended up mixed with diesel pouring from the truck’s ruptured fuel tank, creating a vinaigrette of sorts, which a police spokeswoman told The Local, “was a little harsh on the nose.”

Damage to the vehicle, along with the loss of mustard and vinegar is likely to add up to around €100,000, the Express regional newspaper reported.

The A2 connecting Gelsenkirchen and Hannover – was closed at 1 am when the accident happened and was not expected to re-open until at least 3 pm.

A traffic jam stretching up to 10 kilometres was reported by traffic police, but was largely clear by lunchtime.

The driver escaped with slight injuries, while motorway officials started with the clean-up.

“I can only imagine that they have special equipment suited to clean-ups like this,” the police spokeswoman said.

She could not confirm whether large chunks of baguette were included in the teams’ mop-up kit.