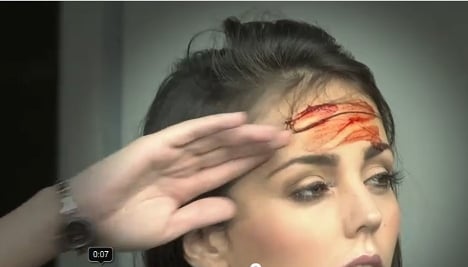 The 37-second commercial begins with a serene blue sky, suddenly pierced by the whine of a chainsaw. The camera then pans down to reveal an expensive-looking house, out of which emerges a sexy young woman in an evening dress and high-heels.

Blood drips on the ground near her high-heeled shoes. As she wipes her brow, she leaves a large smear of blood on her face, before dumping the blood-smeared chainsaw on the lawn.

The slogan then appears: “This wouldn’t have happened with a divorce lawyer.”

The advert offers the services of Dresden-based lawyers Hannig, Ahrendt & Partners. “We wanted to show that we’re a bit different, a bit unconventional, and not quite so buttoned up,” Frank Hannig told the Bild newspaper. “The ad was my idea.”

But the 42-year-old admitted that some might consider the ad inappropriate. “We wanted to see if people like it,” he said. “We might have a problem with the bar association. I wouldn’t have dared do it ten years ago, but everyone can see that it’s satire.”

Hannig has already come up with the script for the next advert: “The woman walks round the corner and gets arrested by the police, and then the slogan comes: ‘We also do criminal law!’ ”