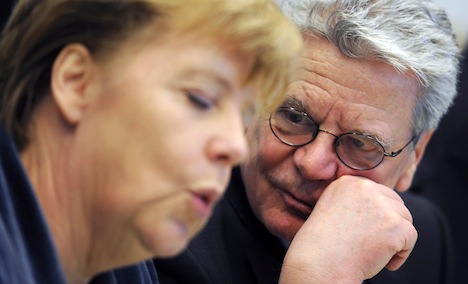 “She has an obligation to describe in detail what it means, and what it means fiscally,” Gauck said in an interview with state broadcaster ZDF, to be aired Sunday night.

In the interview, details of which were released Saturday, Gauck also said he was happy that lawsuits had been filed in Germany against the permanent rescue fund, the ESM, and the European fiscal pact.

“The plaintiffs have every right to express their concerns,” he said. “I am happy that this path will be taken.”

The German Constitutional Court in Karlsruhe is expected to rule on the emergency petitions against the ESM and the fiscal pact on Tuesday.

The plaintiffs are seeking to prevent the president from signing laws approving both measures.

Gauck spoke in the interview of the difficulty politicians have in conveying what is needed to solve the euro crisis.

“Sometimes it is tedious to explain what is at issue,” he said. “And sometimes the energy is lacking to say very openly to the people what really happened. I can help with that.”

He said policies in general are sometimes not communicated well enough. At the same time, he praised the chancellor’s work.

“I could not do what she can, and what she is currently achieving,” he said.