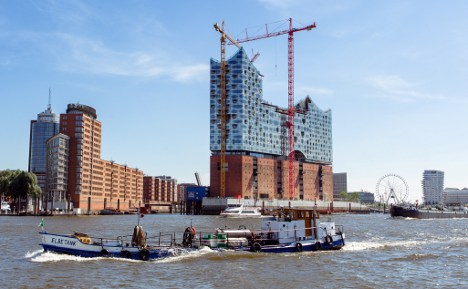 The deal ends an eight-month stand-off between the city and construction firm Hochtief which saw work halted and threats made to cancel all contracts.

“We were able to correct a birth defect in the project with this agreement,” Hamburg’s top official for culture, Barbara Kisseler, said in the statement, estimating the end of construction in mid-2015, ready for the hall to open in 2016.

Construction delays and problems as well as a price explosion have plagued the landmark project since the groundbreaking ceremony in 2007.

Originally budgeted at €114 million, the costs have ballooned to an estimated €323 million, though few in the northern German city expect that to be the end of the story.

The agreement foresees a re-division of responsibilities and a plan for legal recourse for outstanding disputes over the project, which planners have compared to Sydney’s iconic opera house.

Jutting out from the end of a pier between the Elbe River and the city, the hall will take a boxy brick former warehouse as its base, and perch a spectacular glass structure recalling frozen waves on top.

Sandwiched between the two levels, a public plaza will offer stunning views of the city’s 800-year-old port and plentiful church spires. A hotel and luxury flats are also planned.

It was designed by architects Herzog & de Meuron, the team behind Beijing’s Bird’s Nest stadium for the 2008 Olympic Games, who welcomed the agreement.

The city aims to create one of the world’s top 10 concert halls with 2,150 seats and acoustics designed by Yasuhisa Toyota, best known for his work at the Walt Disney Concert Hall in Los Angeles, as well as two smaller venues.