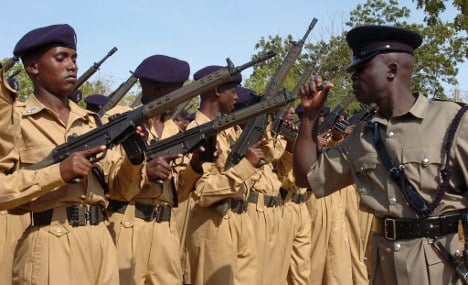 German-made rifles in the hands of the Somali police. Photo: DPA

The appeal came as UN member states were set to launch talks later Monday in New York on drafting the first comprehensive arms trade treaty, which activists say is all the more necessary given the mounting bloodshed in Syria.

“There is a clear case for governments to act now,” said German Foreign Minister Guido Westerwelle in a joint statement with the foreign ministers of France and Britain, and Sweden’s trade minister.

“Every year, millions of people around the world suffer from the direct and indirect effects of the poorly regulated arms trade and the illicit trafficking of arms,” they wrote in the statement published in European newspapers.

They said that hundreds of thousands of people were killed or injured, many were raped or forced to abandon their homes, while others lived their lives under a constant threat of violence.

“Coupled with a growth in the illicit trafficking of arms, we are facing a growing threat to humanity,” they said, noting that as some of the largest exporters in Europe, their countries bore “a special responsibility in this matter.”

Germany is a massive beneficiary of the worldwide arms trade. Though the government has a policy of not approving exports to war zones or regions where human rights could be abused, concerns have been raised over recent reports of a deal with Saudi Arabia for up to 800 German-made Leopard tanks.

Campaigners also say that German small arms trades are not properly controlled. It emerged last year that state-of-the-art assault rifles made in Germany by the firm Heckler and Koch were used by Libyan troops under dictator Muammar Qaddafi against opposition forces.

The ministers wrote that the arms trade treaty should be legally binding, but nationally enforced.

“This will ensure the global consistency required to make the treaty effective, while maintaining state signatories’ right to decide on arms transfers,” they said.

The ministers also stated that they believed that the arms trade treaty should cover all types of conventional weapons, notably including small arms and light weapons, all types of munitions, and related technologies.

“It is also of great importance that the treaty includes strong provisions on human rights, international humanitarian law and sustainable development,” said their statement.

Russia and China are Syria’s main allies at the UN Security Council, and have routinely opposed international efforts to slap sanctions on President Bashar al-Assad’s regime in the wake of a crackdown on dissent that activists say has killed over 15,800 people since March 2011.

They are set to join other governments, like Iran, that are friendly with Syria in opposing plans for the Arms Trade Treaty, which seeks to set criteria to halt the transfer of arms and other equipment that can be used against civilians or to stoke a conflict.

The United States – which produces six billion bullets a year – wants to exclude munitions from the treaty, while China does not want it to cover small arms, which it exports en masse to developing countries.

According to a UN working draft, India – the world’s biggest arms importer – Japan, Pakistan and Saudi Arabia insist they must be free to equip their armed forces at will.

China, Russia and Arab countries say the accord’s criteria are subjective and politically motivated, while South Korea does not want to hinder technology transfers.

Brian Wood, Amnesty International’s arms control chief, said diplomats face an “enormous task” as they try to wrap up the accord by the end of July, and said the final text could be watered down in the interest of consensus.

If all goes well, he said the treaty could come into force in late 2013, after some three dozen countries ratify the document.