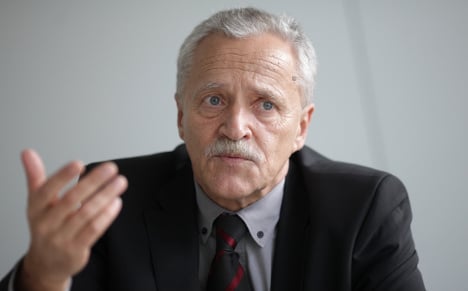 Heinz Fromm, president of the Federal Office for the Protection of the Constitution (BfV), will step down at the end of the month after 12 years, his office confirmed to the Local.

It emerged last week that BfV officials destroyed files relating to informants in neo-Nazi groups linked with the terror group – on the same day that a connection between the murders and the group was made.

Interior Minister Hans-Peter Friedrich publicly reprimanded Fromm, calling for a complete explanation. The Süddeutsche Zeitung said on Monday that Fromm had offered his resignation last week but that Friedrich had refused it. The paper added that the 63-year-old Fromm was due to retire next year in any case.

Friedrich said that Fromm “was, as he conveyed, himself surprised and distressed about the mistakes by employees in his authority”.

“He is, like me, deeply worried about the resulting loss of confidence in the domestic intelligence agency,” the minister said in a statement.

Fromm and the BfV have come under increasing criticism for their failure uncover and stop the trio of neo-Nazis who called themselves the National Socialist Underground (NSU) and claimed to have killed nine immigrant businessmen and a policewoman over several years.

Social Democratic Party parliamentary leader Thomas Oppermann said, “Heinz Fromm’s decision is consistent and deserves great respect.” But he said it did nothing to change the fact that, “The Protection of the Constitution system fundamentally needs to be closely scrutinised.”

Free Democratic Party domestic affairs specialist Hartfrid Wolff said the resignation was an “honourable step” but that it led to the suspicion that, “there could be more than we suspect behind the destruction of the files.”

Wolfgang Bosbach, chairman of the parliamentary interior affairs committee of said in comments to be published in Tuesday’s Die Welt newspaper, work to clarify what happened must continue “no-holds-barred and relentlessly”.

The head of the opposition Greens parliamentary group, Renate Künast, also said efforts must now be stepped up, while the chairman of the parliamentary committee probing the murders did not rule out other staff changes.

“Whether more follow is to be seen,” Sebastian Edathy told Handelsblatt Online.

“We are still at the beginning of the investigation.”

Fromm is still due to appear before the investigative committee on Thursday.

He was appointed head of the BfV in June 2000 having led the state-level version of the service in Hesse.