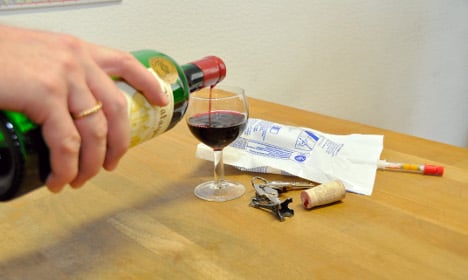 Even relatively sober German motorists venturing into France this summer will have to carry a chemical breathalyzer kit – a small plastic bag with a tube to blow into – in addition to the compulsory warning triangle, high visibility vest and first aid kit, wrote Der Spiegel magazine on Sunday.

The one-use kit costs around €1.50 and is on sale in pharmacies, supermarkets and petrol stations. More expensive multi-use kits start at around €100.

Only kits bearing the letters “NF” for “French norm” are recognized by the French police, wrote the Süddeutsche Zeitung on Thursday. An initial grace period lasts until the end of October, after which police will begin issuing fines of €11 to drivers caught without a kit.

The French government is hoping that the requirement will encourage French motorists to test themselves before driving if they have consumed any alcohol – and that using the kit will become as normal as reaching for a condom before sex, wrote the paper.

“The test in the glove compartment constantly reminds of the risks of alcohol and helps raise awareness with drivers,” the head of the French L’Automobile motoring club Didier Bollecker told the paper.

Alcohol is responsible for almost a third of fatal car accidents on French roads, according to Der Spiegel, compared with one in five British and just one in ten German accidents.

A spokeswoman for ADAC told the Süddeutsche Zeitung there was “no need” for a similar requirement in Germany because German motorists were able “to decide by themselves whether they were able to drive.”

France has the same legal alcohol limit for motorists as Germany – 0.5 mg of alcohol per millilitre of blood. Drivers found exceeding this limit up to 0.8 mg/ml can be fined up to €750, while higher blood alcohol levels can lead to fines of up to €4500 and a suspended sentence, according to the paper.