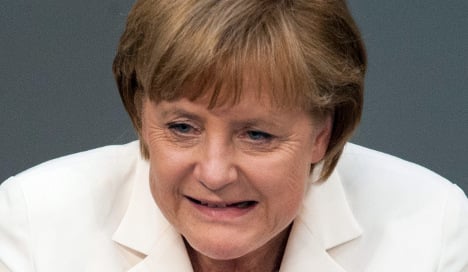 Hard on the heels of a “breakthrough” EU summit, Merkel dashed back from Brussels to address lawmakers before the Bundestag lower house and Bundesrat upper chamber voted by a two-thirds majority to back new budget rules and a permanent bailout fund.

“What we decide today is an important step to make clear to the world that we stand by the euro, we want it as our stable currency,” Merkel said earlier in her second speech to parliament on the euro crisis in three days.

As they have done since the start of the eurozone debt crisis, members of the two main opposition parties backed Merkel who needed their support since the fiscal pact entails changes to the German constitution and thus required a two-thirds majority of lawmakers in both chambers.

Merkel also defended decisions by EU leaders which included agreeing that the EU’s new European Stability Mechanism (ESM) fund could recapitalise banks directly and that the bailout funds can buy up bonds of ailing nations.

She said any use of the bailout funds would follow agreed guidelines, calling it a “good decision, a sensible decision” and stressed any changes or new functions would have to come before the parliament first.

“Today, with the adoption of the fiscal and ESM treaty in the Bundestag and Bundesrat, across party lines, Germany is sending an important sign,” Merkel said before the votes.

“It is a sign of unity and determination, domestically and abroad, a sign of overcoming the European debt crisis, sustainably, and a sign that, for us, Europe means our future,” she added.

Late on Friday, in the Bundesrat representing Germany’s 16 regional states, 65, out of the 69 who voted, approved both the fiscal pact and ESM.

Weeks of horse-trading with the centre-left Social Democratic Party (SPD) and ecologist Greens meant Merkel could be quietly confident of parliament’s approval, but the EU deal struck had earlier rattled some lawmakers.

SPD budgetary affairs expert Carsten Schneider, earlier on the micro-blogging site Twitter, accused the government of a “U-turn” with regard to the ESM decisions in Brussels.

To obtain enough votes, Merkel had to give some ground on SPD and Green party demands for growth measures, and secured support of regional leaders with measures to offset the impact on regional finances of new demands for budgetary rigour, among other things.

SPD chief Sigmar Gabriel said during the parliamentary debate ahead of the votes: “We are agreeing because Europe is more important to us than the party political profile.”

The fiscal pact, of which Merkel was the main architect, has been signed by 25 of the EU’s 27 members and enshrines stricter budgetary rules aiming to prevent excessive public deficits that touched off the eurozone turmoil.

The €500-billion-euro ESM is due to take over from the European Financial Stability Facility and cannot be established without Germany’s backing.

The fund was originally to begin operations on July 1st but is now widely expected to be pushed back.

Germany is also facing a delay after President Joachim Gauck agreed to a request by the constitutional court to refrain from signing off on the two laws immediately after their parliamentary approval.

The court said that it would need up to three weeks to examine a legal challenge by the far-left Linke party.

Germany’s top court has a history of strengthening the role of the parliament on European issues.

The Bundestag will likely be called on to vote on aid for Spain and Cyprus in the coming weeks.