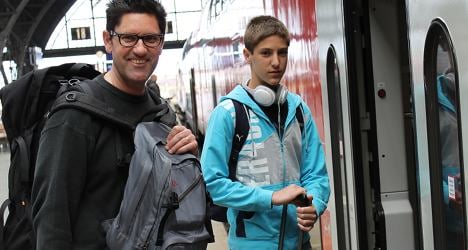 In a former railway station in Leipzig, Manfred Weis steps onto a stage to a round of applause. The IT consultant from Karlsruhe, Germany, is there to celebrate forty years of Interrail at an event organized by the Eurail Group. The applause is in recognition of his own contribution to the history of rail travel:

“I’m often asked how I managed to travel 36,030 kilometres by train in just thirty days,” Manfred tells the audience.

At the age of 18, Manfred bought his first Interrail ticket. He travelled on his summer holidays along with a few friends. During his travels he heard about someone who had turned train travel into a competitive sport, travelling 29,000 kilometres in one month.

“There and then I decided to beat that record. I started by contacting the previous record holder to ask how I could prove my performance,” he said.

Becoming world champion meant having to follow some strict rules: every train journey had to be documented with a signature from the conductor. A stamp from every town was needed in the Interrail pass book, as proof that he really had visited every destination.

The route was planned carefully to ensure that he would beat the record. Soon Manfred was once again travelling Europe’s train tracks.

“I didn’t reflect on it at the time, but it was a way for me to become independent. Meeting new people and getting around by myself made me grow as a person.”

Manfred holds the Interrail record to this day. As well as seeing more of Europe’s plaforms, cities and landscapes than any other person in so short a time, the journey awakened a new interest for him. Rail travel became part of his life.

“I like to see how the climate and the weather changes as I travel. When you travel by train you don’t just go from A to B, you also experience so much in such a short space of time.”

There’s no doubt that there are easier ways to travel long distances:

The evening in Leipzig is not just a chance to mark the silver anniversary of his record journey, but also to recall the many memories that train travel has given him. Photos from previous trips show Manfred posing with friends he has met along the way. These are people who, like him, want to discover new places through train journies. He has stayed in contact with many of these people for many years.

“A great thing about trains is that you don’t have to make an effort to have fun and meet new people. You can sit in your compartment for the whole trip but still people come in and want to talk,” he says.

Experienced train travellers often create their own special daily routines. During his trip a quarter of a century ago, Manfred spent only four nights outside his sleeping compartment.

There was always lots to do, Manfred insists, despite the small dimensions of his living space. Eating and sleeping are as important to the journey as writing his journal and reading. Asked whether he ever got bored his expression is one of incomprehension:

“Look out the window, there is always something to see. The best bit is just sitting there and watching the towns and villages pass by,” he says.

Lots of things have changed since that first journey. There are more train lines and more flexible tickets. There are greater opportunities to travel spontaneously, which suits Manfred:

“My top tip to someone who has never done Interrailing before is to never pre-book tickets. It’s expensive, a hassle and is limiting. Being able to hop on a train on impulse is part of the freedom,” he says.

Manfred’s passion for train travel lives on to this day. But in contrast to his record-breaking trip, he now has both a wife and a son with whom to share his journeys. The day after the event they are standing on the platform at Leipzig station. To nobody’s surprise, they are each clutching an Interrail ticket. If Manfred has his way, it won’t be long until his son is soon doing a trip all by himself.

For information on the InterRail Pass range and where to buy click here.