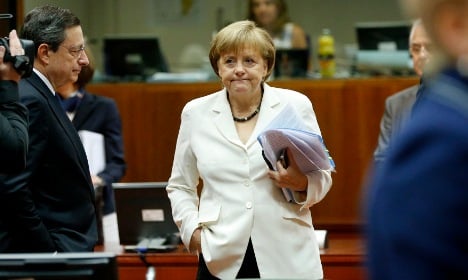 Spain and Italian leaders pushed through a dramatic deal in the early hours of Friday morning to allow direct help for Spanish banks, while Italy got a promise of loans with no austerity strings attached.

These represent some of the biggest changes in the management of the European debt crisis since Greece received its first rescue package, the Süddeutsche Zeitung newspaper said on Friday.

Spanish Prime Minister Mariano Rajoy came away from the meeting with a promise of up to €100 billion from the eurozone emergency fund. The crucial difference is that this can now be paid directly to banks rather than having to go through the state budget – which means it will not increase Spain’s national debt.

This should increase Spanish credit rating, and reduce the likelihood that it will also have to apply for emergency state funding. But it does mean that the eurozone tax payers are collectively taking on the risk of Spanish banks – something Germany had rejected until now, the Süddeutsche Zeitung said.

Merkel’s argument has long been that the pressure of the financial markets is needed to prompt the reforms needed in those countries in crisis. She thus insisted that direct bank rescues would entail increased control by the European Central Bank (ECB).

The deal reached on Friday morning is that aid paid directly to banks would only become possible if the ECB becomes a central banking supervisory body with the power to take control of failing banks and even wind them down if necessary.

Merkel spoke of a new “super supervisory authority” which would likely take a few months to establish, the paper said. The European Commission will put together a concept by the end of the year, until which Spain will be dealt with under current rules.

The Spanish model could also be used for Ireland and Cyprus where banks are also struggling, and borrowing money to prop them up is turning out to be disastrous for national debt rates, the paper said.

Italy also improved its position at the summit, the paper said. Prime Minister Mario Monti managed to persuade his colleagues to enable the rescue fund to buy state bonds – which directly reduces the burden of interest payments.

Should Italy apply for this, it would not have to adopt the kind of harsh austerity programmes being forced on Greece. The ECB would act as an agent in such a buy-up, Monti said.

Merkel managed to score a face-saving point here, the Süddeutsche Zeitung said – for one, the idea is not completely new – and conditions would apply, such as a brake on mass lay-offs from public employment and Rome could be obliged to follow annual budget recommendations from the European Commission.

Merkel remained unmovable on two matters, the paper said. There will be no expansion of the rescue fund, even though it would not be big enough to cover Spain and Italy if they fail to get money from the financial markets. And there will – for now – be no communalisation of European debt.