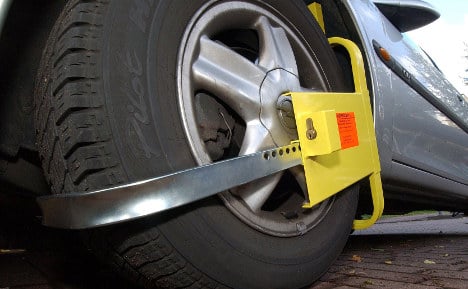 The driver had parked illegally in the small Czech town of Krumau on the Moldau River, while the singers took a walk around, with many visiting the rose festival there, last Sunday.

The illegal parking led to a confrontation between the driver and local police officers.

The Süddeutsche Zeitung said on Thursday that the driver ran off after the police demanded he pay a 2,000 Krone fine in local currency.

When he returned he found the cops had clamped the bus, but managed to lever it off, loaded up his passengers and set off for Germany.

The paper said that Czech media reported that the police had set up a road block after the driver fled the town and that he nearly hit a pedestrian while reversing to avoid it.

But choir members Ingrid Jacob und Friedhelm Röhrig defended the driver and told the Süddeutsche Zeitung the Czech cops hunted him down and attacked him.

They said the narrow roads on the way back to Germany prevented the bus from stopping safely and that the driver was not trying to flee.

The paper quoted passengers saying the police had their guns out when they approached the bus, panicking the driver so much he hid in a luggage compartment.

The choir refused to hand him over, and a two-hour stand-off ensued, during which the singers tried to call the German embassy in Prague as well as police at home in Lower Bavaria.

But Czech police managed to get back-up in the shape of special commandos, who persuaded the choir to open the bus doors – and then electro-shocked and arrested the driver.

The choir got home to the town of Mitterskirchen with a six-hour delay while the driver was held by the Czech police for questioning. By the time he made it home a few days later the bus company had sacked him.

Since then another passenger has spoken to the local Rottaler Anzeiger newspaper and said the driver had threatened the police and tried to plough through a police blockade.