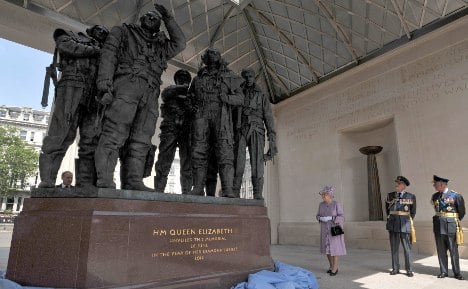 “People here were concerned about the memorial in 2010 when we first heard about it. We lost many people on 13 February 1945 – the accepted figure is 25,000,” Heike Grossmann, spokeswoman for Dresden’s mayor told The Local.

She said the mayor, Helma Orosz, had been to London to talk to mayor Boris Johnson about the memorial when it was first considered.

“She told him about the concerns in Dresden. It was hard to understand for the people of Dresden why this memorial was being built.”

But now that the memorial includes a mention of the victims – a decision taken late in the process – Grossmann said there was no reason to comment further.

Christoph Holstein, spokesman for the city council of Hamburg, much of which was destroyed in a firestorm caused by massive bombing raids in 1943, said the focus in Germany was always one of reconciliation.

“Cities and states have different ways of dealing with the past. These different ways have to be accepted. Germany and Hamburg next summer will be doing something to remember those who died here,” he told The Local.

“We are not critical of what is being done in London but there are different ways of remembering.”

The 70th anniversary of Operation Gomorrah, which targeted Hamburg, will be marked next year with an emphasis on reconciliation.

Holstein said great cooperative work was being undertaken by Hamburg city authorities and people at the British University of Keele to use wartime aerial photographs to find unexploded bombs which could still pose a danger.

“Our thoughts are more of reconciliation,” he said.

The large privately-funded memorial, complete with three-metre tall statues of pilots inside, is the result of a five-year campaign led by the late pop star Robin Gibb. It is specifically to remember the more than 55,000 Royal Air Force bomber pilots and crew who died in the war.

It came under heavy criticism within the UK for its lack of focus on the victims of the bombs.

But Bomber Command Association chairman Malcolm White told the BBC the message was also one of reconciliation. “That’s why it’s writ large on the wall. ‘We remember those of all countries who died in 39 – 45’,” he said.