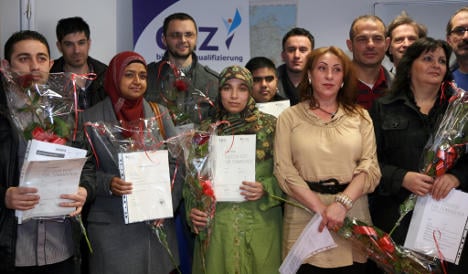 Germany is bucking the trend of reduced immigration that other industrialised nations are experiencing, an Organisation for Economic Cooperation and Development report said.

Last year Germany experienced a 10 percent increase in immigration. And the new immigrants are finding jobs, as the share of immigrants in work rose by four percentage points between 2008 and 2011 to reach 66.5 percent. Worldwide the percentage of migrants employed dropped by three percentage points, the OECD said.

Legal changes designed to prevent discrimination are helping immigrants find work, although they still do not have the same chances as Germans, the Office of the German Commissioner for Foreigners said in a report.

“There has never been as much movement regarding integration as there has been in the last two years, said Commissioner Maria Böhmer.

Although the percentage of jobless immigrants dropped to 16.9 percent last year from 18.2 percent in 2010, it remains more than double the 7.2 percent of Germans without work.

Most of the immigrants asked said they felt integration was working well, according to a study released by the German Foundation for Integration and Migration, but one out of five complained of job market discrimination.

Significantly more children from migrant families stay in school, but the percentage who drop out was still more than double that of German children, at 12.8 percent in 2010. And migrant dropouts were much less likely to return to school and get their diploma.

Overall immigrants account for nearly 20 percent of Germany’s population, with 15.7 million migrants living in Germany out of a total population of 81.7 million in 2010. More than half have a German passport.

But obtaining German citizenship is not important to most immigrants, the German Foundation for Integration and Migration study showed. The study asked 1,220 people in Berlin and Stuttgart with ties to Turkey, Asia, the Balkan countries and the former Soviet Union. Of those, 61.5 percent had no interest in getting a German passport.

Those most interested in getting German citizenship – some 41 percent – were from the former Soviet Union. A quarter of immigrants from both Asia and the Balkans said they wanted a German passport while only 15 percent from Turkey did. Well over half said they were reluctant to give up their original citizenship in order to become German.

Slightly over half said they wanted to vote in parliamentary elections but nearly as many said they were uninterested in politics and one-fifth felt their vote wouldn’t change anything and in any case there were no parties that represented their views. Some two-thirds said Germany needed more politicians with an immigrant background.