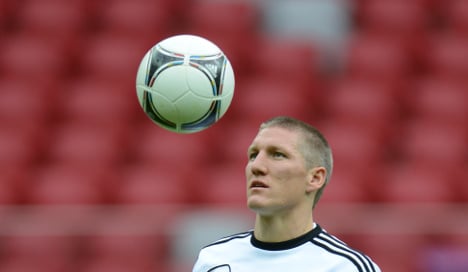 The Italians have a phenomenal record against Germany and Schweinsteiger’s team are bidding to beat Italy for the first time at a major tournament at the eighth attempt in the Warsaw semi-final.

Germany take on the Italians for a place in Sunday’s final against Spain with Joachim Löw’s team looking to end their 16-year wait for a major title.

In losing the Euro 2008 final to Spain and finishing third at the last two World Cups, the Germans have regularly come tantalisingly close to success in the past six years.

Having made his debut before the failed Euro 2004 campaign, Schweinsteiger said he has enjoyed being part of Germany’s rise under head coach Joachim Löw with the team currently on a 15-match winning streak in competitive games.

“Since 2005, we have just kept going up and up, we can be happy to have such a good national team,” said the 27-year-old Schweinsteiger, who has made 94 appearances for Germany.

“We don’t have the crown yet, but it is getting closer and closer.

“It’s fun to be part of the squad, because it is not just about the players, it is the whole team spirit.

“There is a healthy mixture of players here, it is very relaxed and very focused on the football.”

Since succeeding Jürgen Klinsmann as head coach after the 2006 World Cup, Germany boss Löw said a lot of work has gone into strengthening the national team.

Under the German Football Federation’s director of sport Matthias Sammer, a philosophy of attacking football and solid defence has been implemented in Germany’s junior teams which is consistent up until the senior side.

Löw said a lot of credit deserves to go to the Bundesliga clubs with a strong academy system now bearing fruit ripe for the national side.

“There are a lot of people who are responsible, a lot of work has been done in the academies,” said Löw, who was Klinsmann’s assistant at the 2006 World Cup.

“It is much better than it was ten years ago, back then it was all about conditioning and strength, but now we have learned to be more technical.

“What we have also done with the national team is to embed our philosophy into the players and say this is the type of football we want to play.

“We have developed a fantastic crop of players who can play at a high level.

“From that point of view it is like a product of many institutions, the German Football Federations and the clubs.”