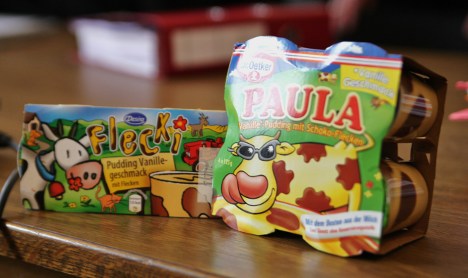 Family-owned food emporium Dr Oetker has already lost once in its fight against discount supermarket chain Aldi over their respective desserts.

This week a judge in Düsseldorf’s appeal court said the packaging was different enough for Aldi to continue selling its Flecki dessert across Europe.

But he left open the possibility of a German ban as it may be profiting from the extensive promotion of Dr Oetker’s Paula dessert.

Paula is sold in a pot bearing a brown and yellow speckled cow with a massive tongue. The chocolate dairy desert with vanilla flecks was introduced to Germany seven years ago and now accounts for more than 10 percent of children’s pre-packaged dessert sales.

Aldi’s Flecki package features a much more banal bovine with a flower in its mouth.

Even though Aldi is using a different name and different packaging, “a relevant number of consumers” will think, due to the similarities of the products; that Aldi is offering Paula for a lower price, the Dr Oetker lawyer argued.

Aldi rejects the claims, saying it has done all that it could possibly do to avoid a confusion of the two puddings.

Claiming that Flecki is ruining Paula’s reputation or making consumers confused about the pudding is ridiculous, he said.

“You can’t impress people with pudding,” the lawyer said. “It’s not an image product.”

The Düsseldorf judge said any ban of Flecki from German shelves would come down to whether Aldi has violated unfair competition laws, for example by illegally profiting from Paula’s reputation.

“That’s the decisive point, the judge said, adding that, “The decision is not easy.”