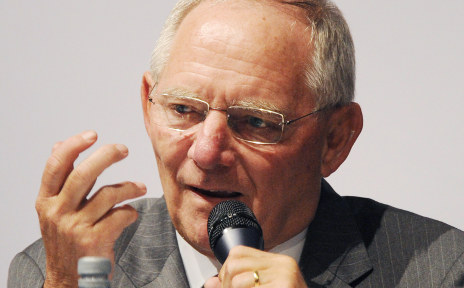 “We must transfer more responsibilities to Brussels in major political areas, without national governments being able to block decisions,” said Schäuble in an interview with the weekly magazine to be published Monday.

His appeal comes after repeated calls by Chancellor Angela Merkel for “more Europe” rather than less, to fight the bloc’s financial crisis.

“Up to now, European member states almost always have the last say,” said Schäuble. “This cannot go on.”

Der Spiegel said the finance minister – a key figure in Merkel’s conservative Christian Democratic Union party – was in favour of turning the EU’s executive Commission into a real government, strengthening the European Parliament and electing a European Union president by universal suffrage.

But Schäuble cautioned that Europe “will not be a federal state like the United States or the Federal Republic” of Germany. “It will have its own distinct structure.”

Schäuble also warned of the euro single currency disintegrating. In this case “many things that we have achieved and cherish would be called into question – from the common market to free travel across Europe”.

“But a disintegration of Europe would be absurd. The world is moving closer together, and in Europe each country would go it alone again? This cannot be, must not be and will not be,” he added.