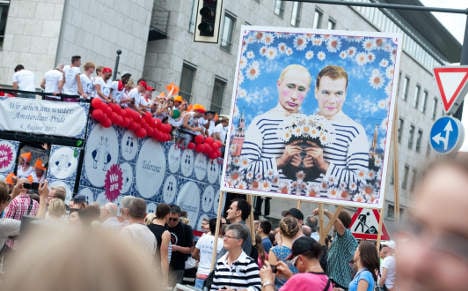 Marching and dancing to thumping techno music, the crowds made their way from the cosmopolitan Kreuzberg district to the Brandenburg Gate, where DJs and musicians were scheduled to keep the party going until midnight.

Organisers said 700,000 people had taken part in the parade, which celebrated its 34th anniversary this year.

The treatment of homosexuals in Russia was a hot topic at the parade, with some participants bearing giant portraits of President Vladimir Putin and Prime Minister Dmitry Medvedev retouched in the flamboyant style of gay French artists Pierre and Gilles.

Gay pride parades are banned in Moscow and since 2006 have been systematically dispersed when organisers try to start them.

Homosexuality was a crime in Russia until 1993 and was classified as a mental illness until 1999.