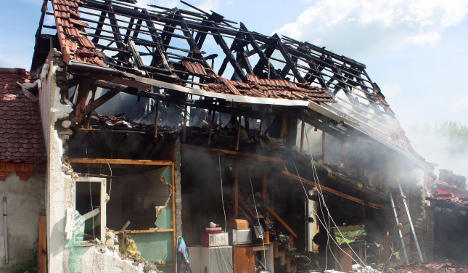 The 56-year old man is believed to have been buried underneath the rubble of his house after a suspected gas explosion.

At around 9 am an explosion rocked the village of Staffelde near Stendal, Saxony-Anhalt, sending debris flying through the air and leaving little more than the charred frame of a family home.

The fire brigade is now working to secure the remnants of the building, which was almost entirely destroyed in the explosion – and the rest of which is in danger of collapsing.

Only then can the search begin among the rubble for the missing man, whose 48-year old wife escaped the house unharmed.

The cause of the explosion remained unclear on Saturday afternoon, police said.

“We can’t be sure what caused the accident,” said a police spokesman. “Presumably it was gas. But that’s what the experts will have to investigate.“