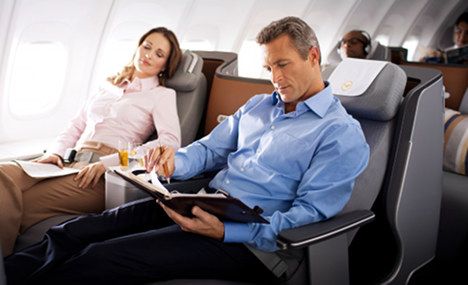 While Lufthansa was able to alter the online campaign – it was too late for the reams of men who had already received the seemingly handwritten plea through the post, signed off with a lipstick-smeared kiss.

“To my sweetheart,” it begins, before proceeding to say how brilliant it is to be the most important thing in a man’s life.

Then comes the catch: “please sign me up for this wonderful Woman’s Special Credit Card” the girlfriend begs.

The letter goes on to appeal to the male frequent flyer to extend his Miles-and-More account and give his woman her own credit card – which comes with female-friendly treats and is geared up to shopping all over the world.

For €35, the card offers invitations to exclusive events, surprise gifts and, best of all, a two-year subscription to Vogue because, as his mystery girlfriend explains, “you know I love to flick through magazines like that.”

It wouldn’t be all shopping, magazines and parties, though. The Woman’s Special Credit Card allows female flyers to save their own air miles “just like you, so we can go somewhere together – like Paris!”

Unfortunately, female Miles-and-More account holders cannot treat their “special man” to a partner card – a male version of the Woman’s Special Credit Card does not exist.

“Will I be getting a letter from my sweetheart asking if he can have a partner credit card to go shopping with?” Tweeted German businesswoman Anke Domscheit-Berg.

Lufthansa took to Twitter in a damage control attempt – although their initial response of “we regret the impression that [the campaign] has made,” did little to stop the flood of angry tweets.

Later, a press release was issued reassuring customers that the company “never intended to convey outdated gender roles or excluding customers from the [partner card] scheme.”

Whether this will prompt a flood of men pressing their wives for a partner card so that they too can flick through magazines like Vogue remains open to question.