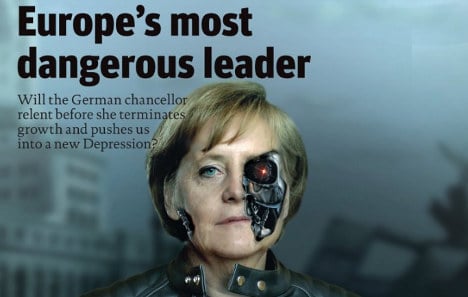 On the front cover of The New Statesman, Merkel is depicted as the Terminator with a prosthetic eye and leather jacket standing in front of a fuzzy apocalyptic scene.

He said the eight chancellors before her had, “presided over a manufacturing miracle at home and the rehabilitation of Germany’s reputation abroad. Under Merkel, however, the country finds itself isolated once again, loathed and feared in equal measure.”

Although Hasan acknowledges that Merkel did not cause the financial crisis, he said, “her deficit fetishism and obsession with spending cuts are exacerbating the continent-wide debt-and-growth crises that threaten to upset more than six decades of pan-European unity and stability.”

She is fiddling while Athens – and Madrid and Rome – burn, he says, and suggests she seems relaxed at the rise of anti-austerity, neo-Nazi parties across the European Union.

The idea of Merkel standing up for hard-working Germans who are put-upon to bail out feckless southerners is nonsense, he says, quoting OECD figures which show Greek workers toil for more hours a year than those in any other EU country, and more than 40 percent longer than the average German.

And Merkel is facing opposition not only from Greeks but also Germans, who have handed her domestic state election defeats this year. “But Merkel won’t budge,” he wrote.

She views the economy like a household that cannot borrow or spend more than it earns, he says. But then he cites a 2010 study by the International Monetary Fund which looked at 170 examples across 15 advanced economies between 1980 and 2009. This found just two cases where government spending cuts led to economic expansion. “Fiscal consolidation typically has a contractionary effect on output,” the report concluded.

“Merkel’s insistence on fiscal self-flagellation, her unwillingness to countenance any fiscal stimulus by Germany or an easy-money policy by the European Central Bank, have pushed depressed countries such as Greece further into depression.”

And even though she recently said she might allow eurozone institutions to buy up debt of crisis-hit member countries is, he says, “too little, too late.”

He quotes US economist Robert Kuttner when he wrote of Merkel pursuing Germany’s narrow self interest because European suffering benefits the country by expanding exports and generating dirt-cheap money.

“She must be stopped,” he pleads.

A spokesman for the Chancellery told The Local on Thursday afternoon, “We do not comment on such matters.”