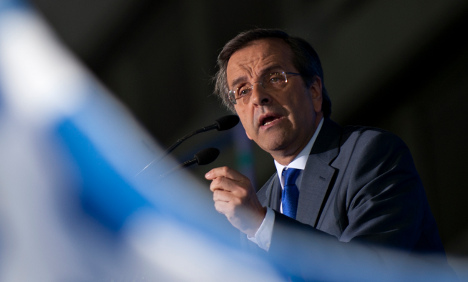 Merkel “wished him luck and success for the difficult work that lies ahead of him,” Merkel’s spokesman Steffen Seibert said in a statement. “The federal chancellor hopes for good cooperation with Prime Minister Samaras and his government and invited him to visit Berlin.”

Seibert gave no details on when any possible meeting could take place.

Conservative leader Samaras was sworn in earlier Wednesday as the prime minister of a new Greek coalition faced with the challenge of trying to revise the terms of an unpopular EU-IMF bailout deal.

Cash-strapped Greece has twice sought bailouts, first for €110 billion in 2010 and then for €130 billion earlier this year. It has also had a €107-billion private debt write-off.

These bailouts have come with strict conditions, including an agreement to cut €11.5 billion – the equivalent of five percent of its gross domestic product – from its deficit by 2014.

Greek parties want this deadline to be put back to 2016, thought that might increase the aid’s final cost to Athens.

Some European leaders have hinted Greece could indeed be given more time, with eurozone chief Jean-Claude Juncker saying: “As I indicated three or four weeks ago we can by all means talk about extensions.”

However, he has stressed: “There can be no discussions about changing the substance of the agreements.”

Germany too has insisted that Greece sticks to the commitments it has signed up to, although Foreign Minister Guido Westerwelle has indicated there could be some discussion of some leeway on the timing.

Ahead of talks among euro finance ministers on Thursday, a senior European Union official appeared more open to possible concessions on the bailout, saying it would be “delusional” and “stupid” to keep the loan agreement intact.

“We would be signing off on an illusion,” the source said on Tuesday, adding that a revised agreement could come “in the course of the summer”.