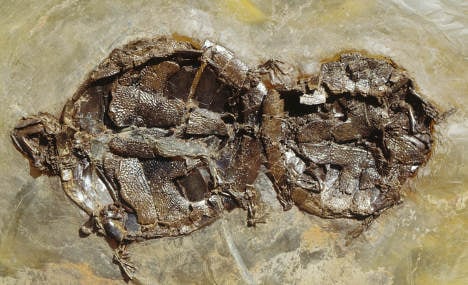 Nine pairs of ancient turtles – Allaeochelys crassesculpta – were found in the Messel Pit fossil site near Frankfurt, which millions of years ago was a prehistoric volcanic lake whose deeper waters are thought to have been poisonous.

It looks as if the amorous turtles started their love sessions in shallow waters, but sank into the deeper, toxic waters and died while still mating, turtle expert Walter Joyce told The Local.

“It is very surprising to find vertebrates fossilised like this. You often find insects caught in amber while mating, but vertebrates have not been found like this before,” said Joyce, a US palaeontologist at Tübingen University.

“If one dies during mating, the other would usually move away. But here both died at the same time and they were preserved while in the act – it’s amazing.”

He said of the tens of thousands of fossils found in the Messel Pit, only these 18 turtles were found in pairs. They date back to the early Eocene period – about 47 million years ago.

“I assumed they were fighting or something, and when I first considered that perhaps they were mating, I thought, no way,” he said. “But I took a close look at all of them, it blew me away that two pairs in particular were amazingly well preserved.”

He said the tails of the males, which contain what he called the “intermittent organs” – penises – could be seen tucked under the shells of the females in two of the pairs.

“There are a total of nine pairs of which seven are still in contact with one another. Two of the pairs were still engaged,” he said.

This enabled conclusive identification of the males and females – something which had previously not been possible.

The males are smaller than the females, and the pairs were mating in open water, which Joyce said means that the females would have chosen their mates. This in turn suggests there was courting behaviour of some kind.

Inferences can also be drawn about the behaviour of the fossilised turtles’ closest living relatives – pig-nosed turtles which are found in Papua and some areas of Australia, said Joyce.

“They are surprisingly similar to those from the Eocene period – but the current ones are much bigger. We know little about them as they live in low-land swampy areas, which are difficult to get to. We are in the odd situation that we know more about the fossilised kind than about the living ones.”

The German-Swiss team which found the fossils was drawn from universities in Tübingen and Zurich as well as scientists at the Senckenberg Research Institute and Natural History Museum in Frankfurt and the Hesse state museum in Darmstadt.

They and Joyce published their findings in the current issue of science journal Biology Letters.