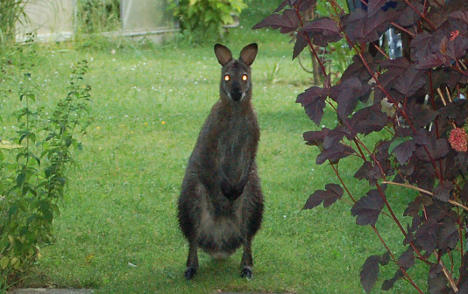 Police were called to the tiny village of Hülshagen in Lower Saxony around 6am on Tuesday after a witness reported a kangaroo loose in the neighbourhood, Bild newspaper reported.

Four officers raced to the scene, and found Bernhard sitting on a freshly-mown lawn.

Though the police had the presence of mind to take a picture of the one-metre tall marsupial, Bernhard sprang into action on being discovered and escaped into nearby fields.

Although they could not find him again, detectives deduced that Bernhard had not hopped to Hülshagen all the way from Australia.

Bouncing Bernhard belongs to a private owner in the nearby village of Lüdersfeld, who had kept him in an enclosure surrounded by two-metre high fences.

Police do not think that Bernhard is a danger to the public, but they do not expect him to return home voluntarily. The hunt continues.

If you see Bernhard, local police ask you to call their missing marsupial hopline: 05721/40040