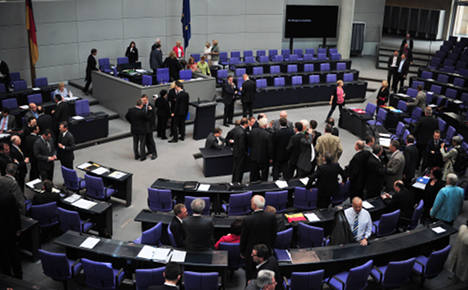 The German government must in future give MPs an “early and effective” influence on Berlin’s negotiating position rather than ask them to rubber stamp a done deal, the constitutional court said in its ruling.

Analysts said the court’s decision would have no impact on Merkel’s chances of getting through the bailout fund – the €500-billion European Stability Mechanism (ESM) – on June 29 when both houses of parliament vote on the legislation.

The decision “should have no bearing on ratification of the ESM treaty and the fiscal pact,” Barclays Capital economist Thomas Harjes wrote in a note.

The court was ruling on a complaint brought by the opposition Green party, which felt it did not have enough say in negotiations on the permanent ESM bailout fund, due to come into force in July.

While the ruling may influence future changes to EU law, the German government said it would have no effect on treaties already agreed.

“The ruling has no impact on euro decisions already taken,” the finance ministry said in a statement.

Foreign Minister Guido Westerwelle said the government would implement the ruling, saying it was “in the interests of Germany’s European policy.”

Germany will pay €21.7 billion in cash into the fund, designed to finance future potential bailouts of debt-wracked states, and provide €168.3 billion in guarantees.

Merkel has been pushing for more integration in Europe, saying the continent needs a “political union” as a response to the euro crisis.

Volker Kauder, parliamentary head of Merkel’s Christian Democratic Union (CDU) and a top ally of the chancellor, said: “The more competences are passed to the European level, the more oversight powers parliament must have.”

Germany’s constitutional court has a history of strengthening the role of the parliament on European issues.

In February, it struck down a proposal to create a small “crisis cell” of deputies that could take quick and secret decisions on approving emergency aid, stressing that the whole parliament had to be involved.

And in a closely watched ruling in September, the court judged that the German parliament must have a greater say in future bailouts.

Court president Andreas Voßkuhle said the ruling was “an important building block in a series of decisions from the constitutional court to strengthen parliamentary responsibility in the field of European integration.”