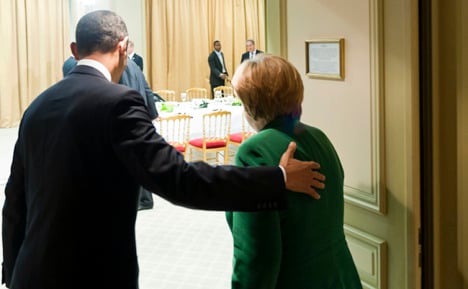 “The president was encouraged by what he heard regarding ongoing discussions in Europe about the path they are pursuing to address the crisis,” White House spokesman Jay Carney told reporters at the G20 summit in Mexico.

“The two leaders agreed to work closely together, including at this G20, to build support for what needs to be done in Europe and the world to stabilise the situation and support growth and jobs,” Carney said.

Carney said that Merkel and Obama also spoke briefly about the bloodshed in Syria during the 45-minute one-on-one meeting in the beach resort of Los Cabos.

Merkel, leading Europe’s largest economy, has emphasized financial responsibility amid a debt crisis in Greece and woes elsewhere in the continent.

Obama, along with France’s new President Francois Hollande, have put a focus on growth.

Lael Brainard, the Treasury undersecretary for international affairs, told reporters: “We’re seeing a noticeable shift in the European discussion regarding the critical importance of supporting demand and job growth.

“Importantly there’s a recognition of the need to assess fiscal consolidation plans on a structural basis, in short recognizing the deterioration in economic conditions”

Brainard said the attitude change includes Germany, which has been under heavy pressure to ease its insistence that the weaker eurozone members slash spending to balance their finances before trying to pump up growth.

“I think if you look at the shift in the focus, we’ll see a very strong focus on supporting demand, strengthening demand, recognizing that economic conditions have deteriorated, is very important to the Europeans in particular,” she said.

“And yes, we have heard it from our German colleagues. They’re factoring demand into their near-term thinking, recognising, again, that it’s important for the euro area to move forward on the key areas,” she said.

She mentioned specifically the need to press for greater integration of eurozone banking, stronger firewalls to prevent contagion from sinking the weak economies, and easing austerity programs to help economies get back in gear.