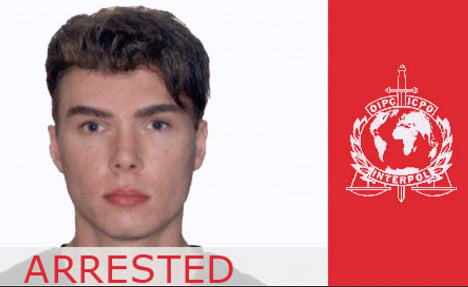 Magnotta, 29, landed back in the country aboard a military jet in the custody of Montreal police and officers from the Royal Canadian Mounted Police, officials said. He will appear in court in Montreal on Tuesday.

He is to face charges of first degree murder, committing indignities to a body, publishing and mailing obscene material and criminally harassing Canadian Prime Minister Stephen Harper and other members of parliament.

“Our government’s cooperation with the international community has led to this individual being swiftly returned to face justice,” Canadian Attorney General Rob Nicholson said.

“It is important that Canadians can have confidence that those who are accused of serious crimes will face the full force of the law,” he added.

The plane arrived in Montreal after a flight from Berlin, but Canadian police did not immediately say where Magnotta, dubbed the “Canadian Psycho”, would be held.

He is suspected of using an ice pick to kill Lin Jun – a Chinese student at Montreal’s Concordia University – sometime between May 24-25.

Magnotta is thought to have then carved up Lin’s body and filmed the act. A video that police believe shows the killing, dismemberment of the body and sexual interference with the corpse, was posted on the Internet.

Police in Montreal were galvanized on May 29 when Lin’s torso was discovered in a suitcase by the trash outside an apartment alongside a busy highway.

The victim’s hand and a foot were sent, meanwhile, to federal Conservative and Liberal parties in Ottawa through Canada Post. And a severed foot and hand that belonged to Lin were delivered to two schools in Vancouver. Lin’s head is still missing.

Magnotta, whose real name is Eric Clinton Newman, initially fled Montreal for Paris in the aftermath of the killing, prompting Interpol to issue an international alert. He was arrested in an internet cafe in Berlin on June 4, after being spotted reading about himself on the web.

“He’s a nut job. I did not trust him. I think he’s mentally ill. He has delusions of grandeur. He concocts stories that he tends to believe and they in turn become fact in his mind,” the relative said.

Lin’s parents, who arrived in Montreal earlier this month to meet with investigators and officials, had called for Magnotta’s quick extradition. The family said they were devastated by their only son’s murder, saying he had been their “pride and hope.”

Family and friends described Lin, who excelled in engineering and computer science at Concordia, as kind, compassionate and responsible.