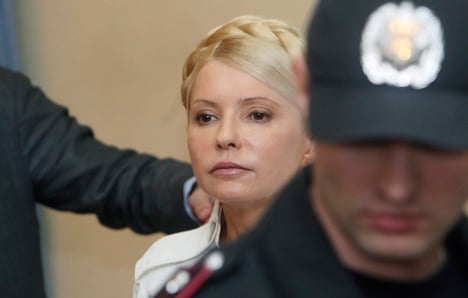 In an interview with Italian paper Corriere della Sera published on Friday, Ukrainian Foreign Minister Kostyantyn Hryshchenko said Germany and other European states had pressured Tymoshenko into signing the gas deal with Russia in 2009 that led to her conviction for abuse of office last year.

The minister said that was the only reason why German Chancellor Angela Merkel was now supporting the imprisoned opposition leader.

“She committed a crime that had negative consequences for national security and the prospects of the Ukrainian economy,” said Hryshchenko in defence of Tymoshenko’s sentence.

“I’m disappointed in the premature judgments that my western colleagues have made in the Tymoshenko case,” he said, adding that some politicians had made statements without understanding “the depth of the problem.”

Rebecca Harms, head of the Green Party’s faction in the European Parliament, did not rule out imposing sanctions on Ukraine in response to Tymoshenko’s imprisonment.

“The question of sanctions against certain Ukrainian politicians or officials keeps popping up in EU discussions about the Yulia Tymoshenko case,” Harms said this week after visiting the opposition leader in a clinic in Kharkiv.