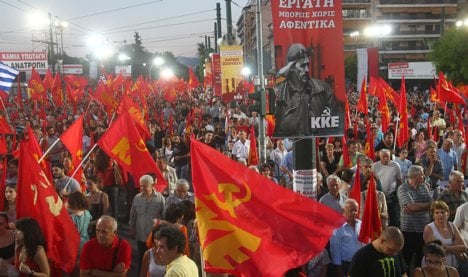 “If the radical left carries on saying it wants the help of all the other countries in the eurozone but does not offer anything in return, then it will only be a matter of time before Greece exits” the eurozone, said Wolfgang Bosbach, chairman of the interior ministry committee in parliament and a close ally of Chancellor Angela Merkel.

Even without Sunday’s elections, Greece is not fit to be a member of the eurozone, the top Christian Democratic Union official said.

“The country’s economy lacks dynamism, competitiveness and efficient governance. And billions more aid will not change that fundamentally,” he said in excerpts from an interview with Frankfurter Allgemeine Zeitung, to be published in full on Sunday.

He said he did not believe Greece’s exit from the eurozone would be decided “in the coming weeks” but that Europe would have to help the country economically during the transition phase.

Greeks on Sunday can either vote against austerity or in favour of a party that is more likely to keep their country in the euro.

The radical left Syriza party’s firebrand leader Alexis Tsipras has vowed to tear up the bailout deal that gave Greece a credit lifeline in exchange for steep budget cuts and renegotiate with creditors from scratch.