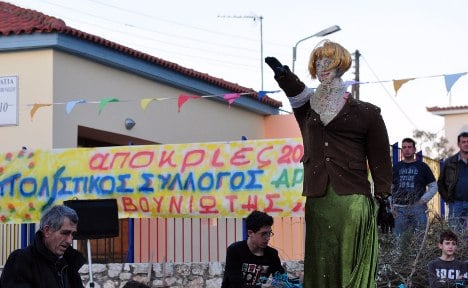 “Your country will only be able to keep the euro with parties that accept the conditions of the international creditors,” the daily said, adding: “Resist the demagoguery of Alexis Tsipras and his (radical-left party) Syriza.”

Syriza condemned the editorial as “a crude and unprecedented intervention, which offends national dignity and tries to undermine democracy.”

The only thing left now is for German Chancellor Angela Merkel to “come and hand out ballots for the right,” said top Syriza official Dimitris Papadimoulis.

New Democracy too was careful to dismiss the endorsement from a newspaper in a country that is widely reviled in Greece as it is seen as the main force behind a raft of painful austerity measures imposed in recent years.

In Sunday’s election, the second in six weeks, all the top candidates are calling for varying degrees of renegotiation of the country’s bailout deal which has provided aid in exchange for a gruelling austerity programme.

The poll will be watched around the world amid concern over the shockwaves that a Greek euro exit would send through the global economy and will play into talks by European leaders divided on how to resolve the debt crisis.

Meanwhile Merkel had no tips for Greek voters. “The chancellor does not give voting advice to neighbouring and friendly countries,” he spokesman Steffen Seibert told a regular briefing.

Asked about Merkel’s vocal support for then French president Nicolas Sarkozy during elections in April and May, Seibert insisted she had not meddled in the democratic process.

“She said that due to the very good working relationship with Mr. Sarkozy and solidarity within the family of conservatives in Europe, she would support the re-election of Mr Sarkozy – it is very different,” he said.

“The federal government is ready to work with any government that comes out of an election in a partner country.”

At the government briefing, German finance ministry spokesman Martin Kotthaus said that the question about voting recommendations put by a reporter presupposed “a strange antagonism” between Germany and Greece.

“This is not a football match we are playing, it is about a European process,” he said.

“After the (Greek) election, the government that forms will be talking to all the European institutions… the troika, the Eurogroup and others. In this European process, Germany is just one voice among 17.”

Asked about the payment of the next tranche of aid to stricken Greece, Kotthaus said there were still a number of hurdles to clear.

“First there are the elections in Greece, then the formation of government capable of taking action – that is what we are all hoping – after that the evaluation of the situation by the troika, then the payment of the next tranche,” he said.

The troika, comprised of the European Commission, the International Monetary Fund and the European Central Bank, is overseeing the rescue for Greece as it struggles with its debt mountain.