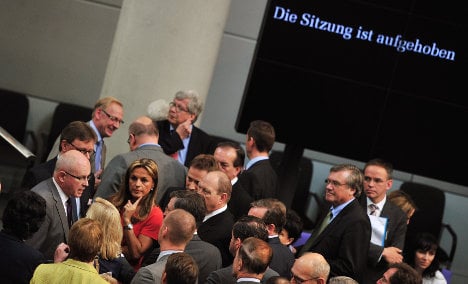 In what one politician told the Bild newspaper was a “strategic masterstroke,” the Social Democrats (SPD) disrupted voting on the proposals by forcing a Hammelsprung.

This left the ruling parties without just 211 of the 310 voters needed to make the parliamentary vote valid and the session was dissolved at just past 11.30 am.

The Bundestag German lower house had been voting on a scheme to pay money to parents who keep their young children at home rather than sending them to state-subsidised day care.

The provision has been championed by the Christian Social Union (CSU), the Bavarian sister party to Angela Merkel’s Christian Democratic Union (CDU).

But critics – including the German opposition parties, international development organisations and the European Commission – believe the money would be better spent investing in expanding the network of day care facilities on offer.

The ruling parties are fuming at the opposition’s trick. Alexander Dobrindt of the conservative CDU called it a “small, dirty piece of foul play” and told the paper it was a “disgrace for democracy.”

“This unprecedented behaviour based on leftist ideological blindness is not fair to the dignity of parliament, nor is it appropriate to the matter,” Bär told the paper.

The opposition parties are celebrating their success – as it looks unlikely that the benefit proposals can now be decided before the parliament breaks for summer at the end of the month.