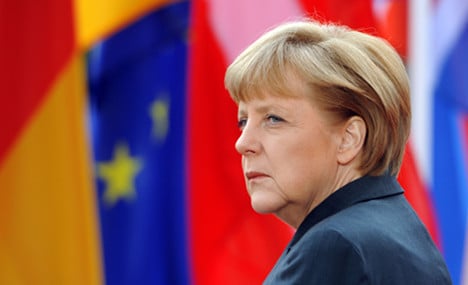 In a speech to German lawmakers ahead of the meeting of world leaders in Los Cabos, Mexico on June 18-19, Merkel said Europe could not take the easy way out with quick fixes smacking of “mediocrity” that failed to address core problems.

“All those looking to Germany again in these days in Los Cabos, who are expecting a drum roll and the answer… I say to them Germany is strong, Germany is an engine of economic growth and a stability anchor in Europe,” Merkel said.

“But Germany’s powers are not unlimited,” she added, cautioning against counting too much on Germany as the sole crisis fighter in Europe.

“All the aid packages will ring hollow if you overestimate Germany’s strength,” she said, describing the tasks ahead for Europe as “Herculean”.

Merkel acknowledged that Germany found itself centre stage as leaders grapple with the incalculable impact of the raging eurozone turmoil on the global economy.

“Our country will be the centre of attention – it’s a fact, all eyes are on Germany because we are the biggest European economy and a major exporter,” Merkel said.

But Europe would only find a way out of the crisis with a strong “political union” that mandated greater fiscal coordination and oversight to put member countries on a “solid and honest foundation”, she said.

But she said all those calling for Germany to “pour billions into eurobonds, stability funds, European bank deposit guarantee funds” in a bid to calm the markets must focus first on fiscal discipline.

“The situation in Europe is sufficiently critical not to give in to simplistic talk. We need to deal with things seriously and courageously,” Ayrault said, warning that the “future of the eurozone is in danger.”

Paris and Berlin are at odds over what initiatives to take to stimulate growth in the eurozone and maintain budgetary discipline.

Merkel did express her support for “a bigger role” for the European Central Bank in overseeing banks to avert further storms in the sector that have posed one of the biggest recent threats to the eurozone.

Spain, the eurozone’s fourth largest economy, was forced last week to accept a 1€00 billion bailout but even that failed to impress the bond markets and the country’s borrowing costs have continued to mount.

Meanwhile Greeks return to the polls Sunday and may elect a government that rejects the terms of Athens’ bailout package, destroying the EU rescue plan.

Merkel said many of the countries crying out for German action, notably the United States, needed to turn their backs on deficit-spending and start implementing the kind of structural reforms Berlin has put in place.

Merkel added that China needed to take action on the flexibility of its currency, amid widespread accusations the yuan is undervalued and contributing to major trade imbalances, primarily with the United States.

However, Berlin has resisted calls for new European stimulus programmes to promote economic growth, saying that fiscal discipline is the only way to restore market confidence in the eurozone.

Merkel drew unexpected support from US Treasury Secretary Timothy Geithner, who Wednesday endorsed Germany’s call for structural reforms to save the eurozone.

“What Germany is saying is to make monetary union work, they are prepared to put a substantial commitment of resources behind this broader endeavour,” Geithner said.

“But for that to work, it needs to be in support of reforms and changes in the institution … and that is a very reasonable position.”

Merkel received more good news closer to home when her coalition struck a deal with the opposition on the date of June 29 for parliament to vote on ratifying the new EU fiscal treaty that she has championed.

Although they have not agreed on all the fine print, the accord was seen as an auspicious sign it would pass with the necessary two-thirds majority.