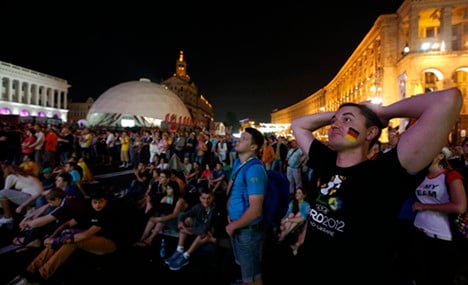 “UEFA today confirms that it has opened disciplinary proceedings against the German Football Association (DFB) following last night’s UEFA Euro 2012 Group B match between Germany and the Netherlands in Kharkiv (Ukraine).

“The DFB is charged with the setting-off of fireworks and the throwing of missiles by supporters. The UEFA Control and Disciplinary Body will deal with the case on Monday 18 June,” European football’s governing body said on its website.

UEFA separately announced earlier that it had fined the DFB €10,000 after missiles were thrown onto the pitch during the country’s opening match with Portugal.

Portugal was fined €5,000 for a delayed kick-off to the second-half of the Group B match in Lviv, Ukraine, last Saturday. Germany won the match 1-0.

The fine imposed on the DFB is a fraction of the €120,000 imposed on Russia after its fans lit and threw fireworks during the game with the Czech Republic last Friday.

UEFA threatened to deduct six points from Russia’s next European championship qualifying campaign if there were any repeat of the crowd trouble.