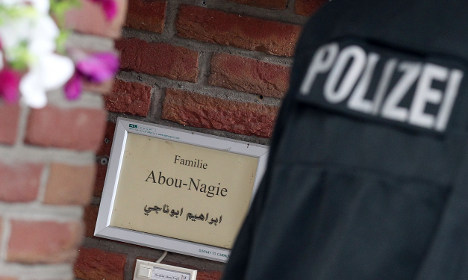 “The vest is a further sign of the organisation’s underlying aggression,” said documents from the interior ministry seen by AFP.

The Berliner Zeitung reported that the vest was found in the flat of former rapper and Salafist convert – formerly called Denis Cuspert but now known as Abu Talha al-Almani. He is considered one of the most effective preachers and propagandist of militant Jihad in Germany.

Around 1,000 police officers were deployed in raids on radical Salafist Islamist groups across Germany, with reports suggesting around 70 addresses were targeted in seven states.

Salafist groups the Dawaffm, Millatu Ibrahim and Die Wahre Religion (The True Religion) were the particular focus of the raids which were carried out in Hamburg, Schleswig-Holstein, Lower Saxony, Berlin, Bavaria, North Rhine-Westphalia and Hesse.

“This association is against our constitutional order and against the philosophy of understanding between nations,” he said on Thursday morning.

“I believe this shows that a constitutional democracy is capable of responding to those who want to eliminate freedom and democracy,” Friedrich said.

Salafism is considered the fastest-growing branch of Islam in Germany and is considered radical, and even dangerous, for its fundamental views. Believers want a theocracy governed by Sharia or Islamic religious law.

A Salafist group started an initiative this year to give away free copies of the Koran to anyone in Germany who wanted one – a move which attracted criticism although it was entirely peaceful.

Strict Salafists reject social liberality and try to live what they see as “pure” Islamic lives, imitating how they consider the early Muslims lived – they would see all women completely veiled, and regard homosexuality as a serious sin. It is thought there are around 4,000 believers in Germany.

It became clear that their influence could be deadly after Arid Uka, a Kosovan German Salafist believer was jailed for life in February for killing two American soldiers at Frankfurt Airport in March 2011.

The extreme right-wing group Pro-NRW provoked confrontation with Salafists in Cologne ahead of last month’s North Rhine-Westphalia state election, holding up cartoons of Mohammed outside mosques.

Furious Salafists even attacked the police, with one man stabbing two policemen during one stand-off.

At one point an Islamist published a video message calling for the murder of Pro-NRW supporters and journalists.

Last weekend around 300 Salafists demonstrated in Cologne without incident.