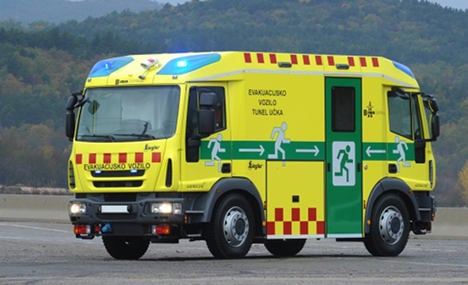 The revolutionary new truck is the first of its kind in the world and will be deployed on missions in a five-kilometre tunnel in Croatia known to be a hotspot for accidents.

The idea is for the truck to be driven into the tunnel and pick up survivors of a crash or fire and get them out again, without having to turn around.

The enormous Ucka tunnel joining the city of Rijeka and the Istria peninsula was rated “inadequate” by German motoring association the ADAC in 2004 for a lack of escape routes and a poor ventilation system.

But this summer nervous tourists and locals alike can relax somewhat as the route will be covered by the new €800,000 Swabian super-truck dubbed the “Merkur”.

Not only is the truck double-ended, but it’s completely electric so would not add to the toxic fumes that can gather in a tunnel after a crash, news magazine Der Spiegel reported last week.

Each of the two cabins has room for a driver and up to two others. In the middle there is seating for 12 people and enough breathing apparatus for everyone. The whole vehicle is slightly over-pressurised, making it difficult for toxic gas or smoke to enter from outside.

Being experts in fire truck design, Ziegler have equipped each Merkur with forest fire fighting technology. This includes a heat sensor camera which could guide the vehicle if smoke is too thick to see through.