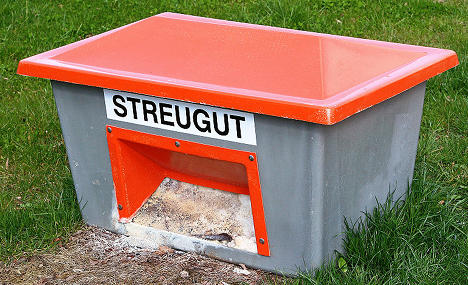 A bin similar to the one the man was trapped in. Photo: Darkone, Wikipedia

The 25-year-old man was on his way home in the Bavarian town of Augsburg when it started to rain. Unhappy with the prospect of getting wet, he came across a large grit bin and climbed inside to stay dry.

But due to his level of intoxication he failed to realise the lid had locked itself upon closing. He settled down in the grit and fell fast asleep for the night, regional paper the Augsburger Allgemeine reported on Sunday.

After waking up he spent an unknown time trying to get out on his own until eventually, just after 6am he called the police on his mobile phone. The initial problem was he could not tell them where he was.

Eventually he and the officers on duty worked out that he could “find himself” by switching on the GPS system on his phone and he was able to tell them exactly where he was.

Police arrived at the scene, opened up the grit bin and hauled him out.