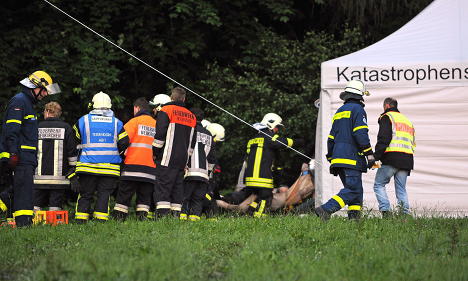 The group was travelling from Augsburg to Salzburg, Austria when at around 5 pm witnesses reported a large bang. The vehicle had reportedly been flying close to the tops of trees in a pine forest in the Teisendorf area before it crashed to ground in flames.

Police said they do not know the cause of the crash, but that low cloud cover could have caused the pilot to become disorientated. They said the vehicle was seen flying just 15 to 20 metres from the treetops before descending further.

Details of the identities and ages of the victims have not been released, but it is known that the vehicle, a Robinson R 44, was registered in Austria. The group was making a stop-over in Augsburg after flying from another location, but it is not yet known where.

The crash-site was in an area characterised by steep cliffs and dense forest, just 200 metres from a farm house, and 800 metres from the A8 motorway connecting Munich and Salzburg.

Broken branches scattered the floor of the forest around what remained of the helicopter, a police spokesman said. A single rotor blade was seen hanging from a tree.

Due to the nature of the accident, it may take some time before the victims can be identified and the cause of the crash uncovered, the spokesman added.