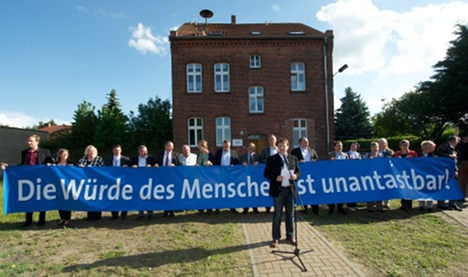 Two bus-loads of representatives from the Saxony-Anhalt state government arrived in Insel on Friday for talks with the residents who are furious at the presence of the two men in their town.

But when the 70 politicians got there, they found most of the 400 Insel residents had gone to a “boycott barbecue” instead.

The housing of the two men in the small village several months ago infuriated many of the villagers who said their peaceful and safe home had been ruined.

It has certainly been turned into a place of confrontation, with police now on permanent patrol around the newly-erected fence surrounding the men’s house – after a mob tried to storm it last week.

The neo-Nazi NPD party has embraced the issue, sending members from around the region to push their “death penalty for child abusers” idea.

Politicians from the state of Saxony-Anhalt had hoped for a large turn out of Insel locals and arrived with a giant banner reading “the dignity of mankind is sacrosanct”. Instead, they faced a meagre audience.

One elderly woman stood up to shout “Who is thinking about the victims?” before walking out.

Saxony Anhalt’s state premier Reiner Haseloff said he remained open to discussion, but would not consider moving the men – one of them had already been chased out of Chemnitz by demonstrators.