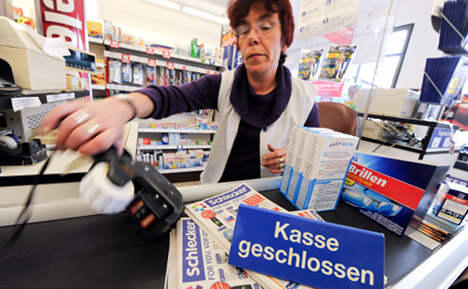 Meanwhile queues formed outside some stores on Friday morning as the nationwide closing-down sale kicked off, with up to 50 percent off everything in all the shops.

She now hopes to start a similar scheme specifically for the 11,000 people who have already lost their jobs at Schlecker, and the 13,000 who are about to follow them into unemployment.

Bankruptcy administrators tried to save the rump of the Schlecker drug store chain by closing more than 4,000 stores and slashing the workforce from 30,000 to 13,500 in January.

But this was not enough and now company is set to be broken up completely. Most of it’s staff, 70 percent of whom are women, had professional training and worked full-time.

Of those who were let go in January, 2,300 have already stopped going to the job centre for whatever reason. Around 600 were offered a position in what remained of the company.

As kindergarten and care-home positions are currently difficult to fill in Germany, von der Leyen praised the ex-Schlecker staff for their courage throughout the company breakdown and told them that if they wanted to go for one of the new jobs, the option to do so would be there.

Participants in retraining scheme would receive unemployment benefits until they were ready to take on a job.

Head of service trade union Verdi Frank Bsirske welcomed the plan, calling it a chance for former Schlecker employees to find work in a saturated market. “There are just 25,000 vacancies in retail, and 360,000 people fighting for them,” he said.

Family Minister Kristina Schröder also expressed approval of the idea, saying, “I can imagine that of these worldly-wise women, there are many who would approach such an opportunity with excitement and engagement.”

“We have to be willing to look far and wide for qualified nursery teachers and care assistants,” she added, but warned that care would have to be taken to monitor the quality of the training on offer.