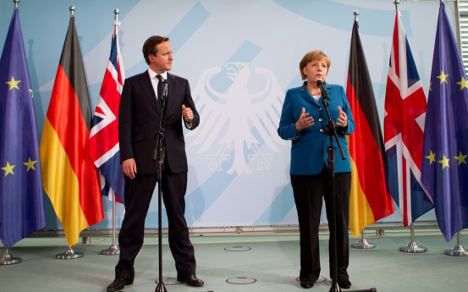 In a short news conference after talks in Berlin, Merkel said the pact, which aims to toughen budgetary discipline in the EU, was “necessary but not the only precondition” to stem more than two years of turbulence.

For his part, Cameron added that the fiscal pact, which non-euro Britain has not signed, was “important but not sufficient” to pull the eurozone out of its malaise.

Merkel said that looking further out, the eurozone need to pool sovereignty in areas other than tax and spending if such crises were to be prevented from happening again.

“When we look at the medium and longer term, we need more coherence, not just in terms of fiscal policy, but also in other areas … (the fiscal pact) is a necessary step, but not sufficient,” she added.

Twenty-five of the European Union’s 27 member states have signed up to the fiscal pact.

Merkel added that she wanted to see “certain parameters” within the eurozone harmonised.

“For example, when one country spends nothing on research and other spends three percent of its gross domestic product; that cannot work in the long term,” the chancellor said.

“The responsibility of being in a common currency brings other duties with it. This is shown in the fiscal pact but it does not call into question the togetherness of the whole EU 27,” she insisted.

Speaking at a meeting of students earlier in the day, Merkel had reiterated that there was no one magic solution that would cure the eurozone’s ailments.

“Calling for this one big bold stroke and then the euro crisis will be gone. This won’t work,” she insisted.

“These problems have piled up over many years and now it will take some while to render this system fit for the future. It’s obviously in human nature to wish for this bold stroke but I don’t think it will work,” she added.