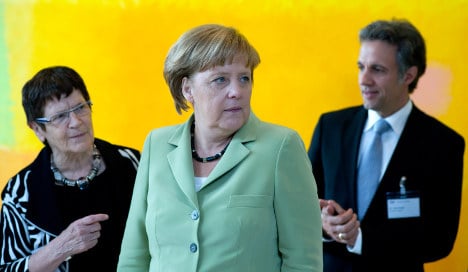 The German leader, who has been criticised for staunch opposition to some proposals to resolve the eurozone debt crisis, added: “We must not remain immobile because one country or another does not want to follow yet.”

On Wednesday, Merkel discussed the debt crisis with US President Barack Obama and Italian Prime Minister Mario Monti in the latest in a series of calls with global leaders.

Cameron also called on Wednesday for Europe to come up with an “immediate plan” to resolve the eurozone crisis.

Leaders are under intense pressure from their populations as well to take action to break the back of the two year old crisis at a June 28-29 summit.

But Merkel told German television that not all of the bloc’s problems could be solved with one summit meeting.

The German chancellor said she did not believe “that one summit is capable of settling everything in one fell swoop.”

What she wanted to do at the summit was to propose a framework for getting to a stronger political union, she added.

She explained again how she felt Europe could spur growth to help governments pay down their massive debts and reduce dogged public deficits.

“Budget consolidation and growth are two sides of the same coin,” she said.

Sustainable growth could only come from boosting the competitive positions of all EU members, Germany’s leader added.

“We must, in each European country, confront our respective weaknesses,” Merkel said.

The debt crisis’ current focus is on the Spanish banking sector, and Finance Minister Luis De Guindos said Wednesday that Madrid would decide how to fill a massive hole in the banks’ finances within two weeks.

Madrid must come up with €80 billion euros for bank recapitalisations in the midst of a deep recession brought on by the bursting of a Spanish real-estate bubble.

The International Monetary Fund is to report on the state of Spain’s banks on June 11, with separate studies by outside consultants including the world’s biggest firms of auditors also due over the following week and months.