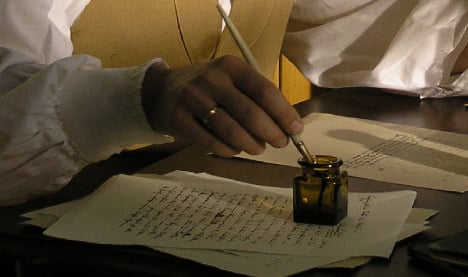 The 20-year-old Michael from Bayerisch Gmain, close to the Austrian border, poured his aching heart out onto vellum parchment – and put the passionate epistle in an envelope of the same material. But he did not want to sully his handiwork with stamps and postage marks.

“So I looked for a neighbour of Pia’s on Google with a German-sounding name, and sent her a letter in a second envelope, asking her to please put the parchment letter in Pia’s letter box,” Michael said Tuesday.

But the neighbour was confused by these complicated instructions. “She apparently panicked and took the letter to the police,” said Pia.

When she heard what happened, Pia’s mother went to the police to explain that the letter had been sent with romantic intentions. “My mother then told me in the evening that the police had thought it was a letter bomb – apparently the officers looked really scared.”

The mother managed to calm the nervous cops, who took no further action.

But Michael was not off the hook – Pia took a dim view of his advances. “I know he meant it nicely, but I have asked him to leave such games in the future,” she said.

Michael has apologised to Pia’s mother, and added: “I wanted to send the neighbour an apology and a box of chocolates, but who knows what would have happened.”