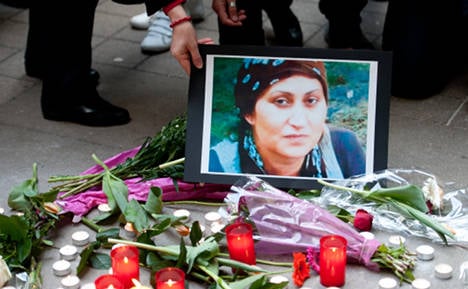 An anonymous courtyard in the Kreuzberg district was filled on Tuesday evening with a mix of mourners and demonstrators – it was here that Orhan S. threw parts of his wife Semanur’s body after killing her on the roof.

Those gathered lit candles and laid flowers on the ground in remembrance, but the talk was also of prevention. Many of the people there were wearing T-shirts bearing the slogan “Men Against Violence” above the image of a bushy moustache.

The horrors which took place on the roof and the attention they grabbed across the country have inadvertently given frustrated men from Germany’s migrant community a box on which to stand and decry an all too often hidden pandemic.

Baba has been working with Aufbruch Neukölln! for the past six years, helping men to fight drug addiction and raising awareness and rejection of domestic abuse.

Wider impact on the community

He, like others who turned up that evening, is concerned by the wider impact that Semanur’s killing has on the city’s Muslim and migrant people.

“We know that he was shouting ‘Allahu Akbar’ from the balcony, which means God is great in Arabic,” said Baba. “But what he did was nothing to do with God, Islam forbids murder and this has to be understood.”

Mourners had laid large photos of Semanur on the ground along with the candles and flowers – and hand-written placards reading, “Never turn away from help” and “We are shocked by so much violence”.

Heval K. told The Local that he had known the 32-year-old suspect Orhan S. loosely for the past 20 years. They had mixed in the same social circles. “I saw him about two weeks ago, he looked ill, something was clearly wrong.”

Indeed Orhan S. was known to have had problems with depression and schizophrenic episodes and is now being held in a psychiatric institute.

’It was about mental illness, not Islam’

“That is what this was about, mental illness, not Islam,” the 26-year-old added. An animated young Kurd, he explained that he was here “out of solidarity” and to help spread the word that domestic abuse is not a problem confined to Berlin’s immigrant circles.

“It’s a problem everywhere, the difference is that the German media make a much bigger deal out of it when they can connect it to Muslims,” he said. His friend nodded beside him. “The media desperately needs to be more objective.”

He, like Baba, believes that raising awareness about domestic abuse within Germany’s migrant communities could help not only them, but encourage German men to speak out too and even aid relations between different groups.

“Mixing with Germans is hard; girls have turned me down before because they think I could be violent. And when a man throws a woman’s head off a balcony this only serves to widen the divide.”

Pointing to the group of Turkish pre-teens that have gathered behind him – all wearing red and green “Men Against Violence” T-shirts, Heval said, “We don’t want young people growing up in this kind of atmosphere. The boys nod, the youngest of the group chews on sweets being handed out by one of the women present.

“We just want to prove that not all of us are like this, and the sheer cruelty that happened here has left us truly saddened,” he added.

Anger at the violence and its circumstances

Groups of men from Aufbruch Neukölln! young and old, of both German and migrant descent stand side by side for photos. Neighbours greet each other with hugs. The atmosphere seemed to contain a certain subdued anger – for what had happened in this case, and the circumstances surrounding it.

Away from the crowd, 43-year-old Duran Korkmaz surveyed the scene. Speaking in perfect English he lamented the high unemployment and poverty levels in Berlin.

“Mental illness is not a taboo in the Turkish community, but I think the problem is more of a class thing,” he said.

“No matter where you come from I believe that if you are in a lower social class, depression has more of a stigma.”

Korkmaz, a dentist, is one of the Aufbruch Neukölln! volunteers running a helpline for Turkish men struggling with violent urges. “We try to de-escalate the situation,” he said.

The three placards on the floor appeared to offer a quiet message to the women present – have the strength to speak out against domestic abuse and try to prevent the fate of Semanur S. from being repeated.