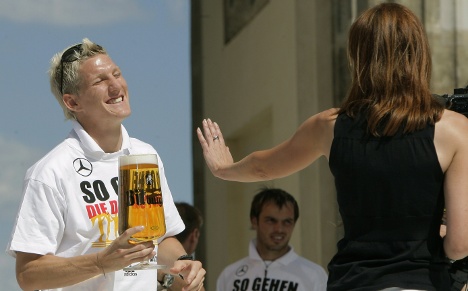 Germany arrived at their Euro 2012 base near Gdansk, northern Poland, on Monday as one of the favourites to challenge reigning champions Spain.

But a successful campaign also means getting the details right, and team manager Oliver Bierhoff said the management was still mulling the extent of conjugal visits. “We haven’t yet decided whether the women can stay overnight,” he told Wednesday’s Bild newspaper.

Bastian Schweinsteiger and his team-mates will be grooming themselves for Sunday, though – the day after Germany’s opening match against Portugal has been designated “love day,” when players will be allowed a few hours to “relax” with their partners.

Perhaps to help the players score in the bedroom as well as on the pitch, Löw has expressly permitted alcohol in the German camp – though only in moderation. One beer or wine before bed is fine, since this is considered not to have any adverse medical effects. Löw is also not planning to have the hotel mini-bars cleared out – a common policy among national teams.

Löw is even planning to allow smoking. “I wouldn’t ban anyone from smoking, except at meals and during a meeting,” he told Bild, although he is on safe ground as the only occasional smoker in the German squad is reserve goalkeeper Tim Wiese.

But other rules are to be more draconian – players are only allowed out until 11pm, and they can’t go anywhere further than one hour from the team hotel.

The players are lined up to take home record bonuses should they emerge triumphant from the tournament. The German Football Association (DFB) has announced that each player would receive €300,000 if they win the trophy, €150,000 for reaching the final, €100,000 for the semi-final, and €50,000 for the quarter-final.

But if they get knocked out in the group stage, the players will have to go home with their tails between their legs and their measly standard wages. But at least then they can have as much nookie as they want.