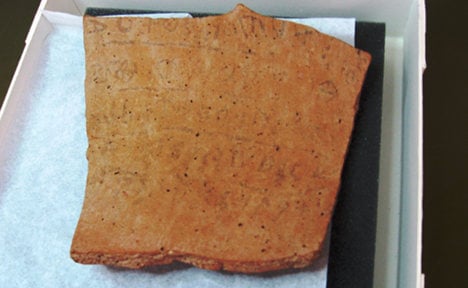 The five lines of ancient Hebrew were painted onto a clay pot about 3,000 years ago. Their author is thought to have been a trainee court official – they were instructed to write out important laws over and over again to improve their writing skills.

Archaeologists at the Hebrew University of Jerusalem discovered the inscription-covered clay slab in 2008 while excavating the site of a ancient city known to have existed in 10 BC, Khirbet Qeiyafa, which lies 25 kilometres south-west of Jerusalem.

They sent copies to experts in ancient languages, who all had a go at translating the ancient scripture.

“The language seems to be ancient Hebrew, but it is closely related to other west-semitic canaanite languages,” the Old Testament expert told The Local in an email.

The tablet’s significance lay in its instructions to take care of the disadvantaged of ancient Israeli society.

These were likely to be some of the first laws implemented, he said, adding that the tablet was probably a copied version made by a royal official given the task to learn the laws.

The Hebrew version of the Old Testament, legal texts from the Tora and accounts from prophetic teachings all contain stark criticism of the common mistreatment of minority groups.

“The form of the letters is older than the oldest Israelite text we have known until now, the “Gezer calendar”. This points to the 10th century BC,” Achenbach added.